Living in the Wild.

We don’t actually live in the wild. It is not like we don’t have electricity or flush toilets or anything. We live in a house just like a good number of you. With all the normal amenities. But sometimes it can feel a bit wild. This morning was one of those mornings.

This morning I came downstairs. I am normally the first one up in the morning, and to my surprise it sounded like there was someone else up. To add to that, many of the lights were on. This by itself does not mean anything, if you live with teenagers you understand their aversion to turning off lights. But it did sound like someone else was up.

I have learned my lesson, of living with three black belts, two brown belts and many other children who are also trained in martial arts to some level, you don’t startle them. So I came downstairs and just walked into the eat-in kitchen like normal. To my surprise, there was no one there.

I am not a morning person so despite the fact that I was awake and upright, It took me a moment to take in what I was seeing. The garage door leading into the house was open. At first my heart started to beat faster. There had been a noise. I didn’t see anyone, I still heard the noise and the garage door is open. 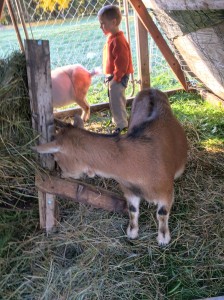 Let’s back up for a moment. Our kitchen counters are set up like a “U” so there are parts of the kitchen proper that you can’t see until you are in the kitchen. So my anxiety was a bit high, but not too high I mean really what would someone be doing in our kitchen rummaging around in our cupboards. Did the dishwasher repairman come in the middle of the night to fix the dishwasher that has never worked quite right?

I took a hesitant step further. The noise sounded odd.

Now, we raise animals for various reasons. The reasons are not the important part here. But we do keep them out of the house. They are not pets, they are farm animals. You will occasionally see us bring one or two of the baby goats into the house, but that is in an attempt to get them used to humans. Several of the adult goats we have are not mean to humans, but they don’t like them, so they run away all the time. We want them to come to us, for other reasons than food, or at least not run away. That is another story. The point is that for the most part, our animals don’t come in the house, and they normally are supposed to be in their own areas. Goats in their enclosure and chickens in their coop. 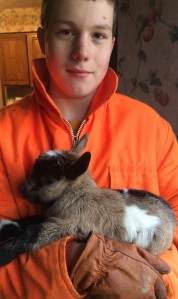 I took a step closer to the kitchen, still a bit nervous because I could not see what was making the noise. As I rounded the corner, I spotted them. About a dozen of our laying hens had gotten out of their coop, and into the garage during the night, and apparently the last of the kids to come in in the evening didn’t check to make sure the door was latched, so now we had chickens, that were not ready to eat, in our kitchen!

It took a couple of minutes and more than one pass, but I eventually did get them out of the house. For those of you, who sometimes ask, this is what our life is like.