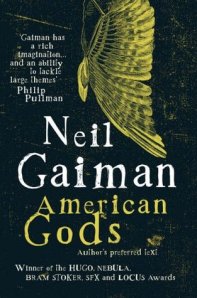 Four and a half out of Five stars

I am putting the summary of this book up front, because I think not having read a summary somewhat lessened my enjoyment of the story.

Summary:
Days before his release from prison, Shadow’s wife, Laura, dies in a mysterious car crash. Numbly, he makes his way back home. On the plane, he encounters the enigmatic Mr Wednesday, who claims to be a refugee from a distant war, a former god and the king of America.

Together they embark on a profoundly strange journey across the heart of the USA, whilst all around them a storm of preternatural and epic proportions threatens to break.

Scary, gripping and deeply unsettling, AMERICAN GODS takes a long, hard look into the soul of America. You’ll be surprised by what and who it finds there…

American Gods by Neil Gaiman
My rating: 4 of 5 stars

Before I begin, I want to make it clear that I did really enjoy this story. And even though I enjoyed this story, my feelings about it are incredibly complex, but at the end of the day I have given it 4.5 stars.

But why only 4.5 stars when there are 5 to give? Well, like I said, my feelings about this story are incredibly complex. Let me see if I can explain why.

It was not until tonight, when I read the summary of this book, and saw that it was supposed to be unsettling that it really hit me. That was at least partly what startled me about this book. Not entirely mind you, but partly. I will get to the rest of what bothered me shortly. I kind of wish I had known this before I read the book. Maybe then my feelings about this book would be less complex.

The book is powerful in a way that nothing else I have read by Mr. Gaiman has ever been. It was powerful in ways that made you ache for the injustice that a great number people have been made to suffer, at the hands of others. It powerfully illustrates the loss of the old ways, in seeing the old world really pass away, to be replaced by something that is in my opinion less worthy. While not romanticizing those ways. It lets you clearly see that the good old days were really not that good, not that what we have is all that much better, maybe just better at hiding it.

Now, I am a lover of “old world” mythology. I have read and studied, mythology from the middle east, and west. (Private admission here, I have read and tried to study “far East” mythology and I just don’t get it, but that is not the point.) The reality is that these myths are very often dark. They can be disturbing. They can be and are racy at times. Zeus, for example was so lustful that kings locked up their wives and daughters to keep him away from them. And yet he always found ways around them, often forcing himself on them when he did. There are parts of mythology, and history in general that are disturbing, and scary and sexy and violent, with combinations of each of those attributes in every possibly conceivable way. Ten thousand slaves crucified for an uprising that they may or may not have had a part in during the early parts of the Roman empire, or the book of Esther to give two examples.

So it is not that this book was any of those things that really struck a cord with me. Yes, I felt for the people in the book, and I felt real anger at some of the injustice, and sadness at my inability to do more in the world, and even regret at the loss of the “Old gods.” The problem is that, while I was reading this book, the word that came to mind more than once was raunchy. The book talks about sex, openly and graphically. There is no hiding behind euphemisms here. That really shocked me. It was not only the sex of the gods, but the sex of the humans around them, described in often raw detail. But it was also the sex of the gods, violent, destructive, and in many ways what we would normal call inappropriate.

Make no mistake, this is a dark, brooding book. This is not the book you take to the pool over the summer as a little light reading. It is also not the book you leave lying around where impressionable young children (and some adults) may stumble on it. But it is a incredible, thought provoking, emotionally powerful book. It tells an incredible story, and Neil Gaiman once again proves that he has earned his title as the most popular author in science fiction.

I recommend this book to anyone over the age of 18 who is not squeamish about graphically described sex, and even those who are, but because despite those parts of it, this book really tells an incredible story.

I got the 10th anniversary edition of the book from audible, the one that Neil Gaiman describes as his preferred version of the book. It also includes some outtakes and notes from the author at the beginning and the end of the book. The audio quality and performance by the voice actors was top notch.

View all my reviews