Editors note. I saw this movie at the drive in with my kids as part of a double feature. That means that by the time this movie started It was after 10:45 and it didn’t get over until almost 1 AM. All of the kids stayed up until the end even the 6 year old. That alone means this was a good movie.

Disney / Pixar does it again. Even when it is a sequel or in this case kind of a prequel, Pixar manages to produce a story that is entertaining, age appropriate, and stunningly beautiful. 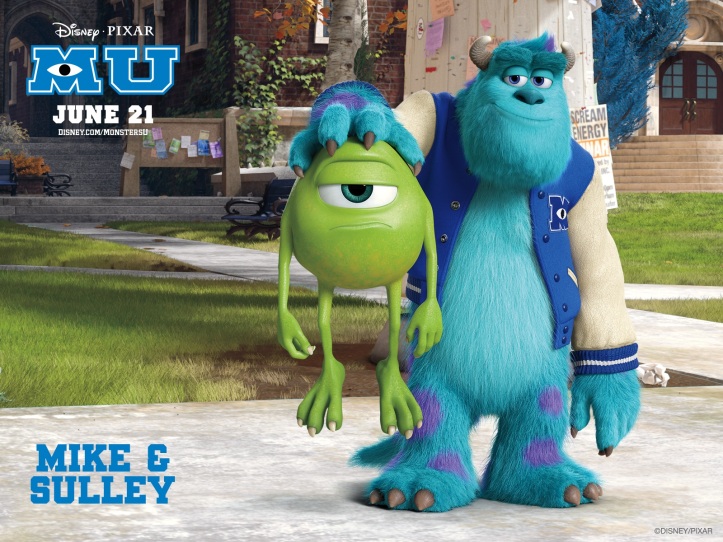 Spoilers beyond this point

You knew that Mike and Sully could not have started out together. They are too much of an “Odd Couple” to have just become friends. Sure sometimes work makes teams out of people, but very rarely does it make good friends. There had to be something that brought them together. This movie tells us that story.

As you would expect, being as different as they are they were not the best of friends to begin with, and it is not until the closing minutes of the movie that that they really become friends. Even at the climax of the movie when they have to work together get out of trouble they are not friends just two Monsters working together to get out of a really tough spot. 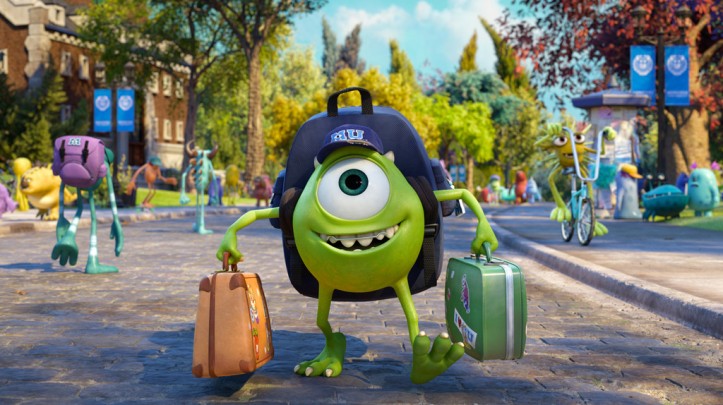 The movie follows MIKE WAZOWSKI from the moment he realizes that he wants to be a “Scarer.” From that moment on he spends his life trying to get into Monsters University. But when he gets to college everything is not what he expected. Within the first semester he is kicked out of the Scare Program, and is forced to make a deal with the dean of the school and team up with the most unlikely of monsters to get himself back in to the program.

JAMES P. SULLIVAN has never had to work to be scary. He comes from a long line of famous scarers. All he wants is to get through his classes have a little fun and get on with his life. James is completely the opposite of Mike who has to work for every scare.

Even when they are forced onto the same team of “looser” monsters in an attempt to get back into the scare program, by competing in the College Scare Games, they can’t find a way to work together. While Mike controls every move of the other monsters trying to get them to act more scary, James realizes that this technique, while it might teach them a few things won’t turn naturally non-scary monsters into the scare machines they will need to win the contest. And the two of them but heads.

Slowly they gain a level of respect for each other, out of understanding but they still don’t like each other. When James helps Mike complete the final challenge of the College Scare Games by cheating the trust and respect that was just starting to grow is broken.

Monsters University focuses most on Mike, and for most of the movie James is the force that Mike is trying to get over. I don’t want to say that James is ever really the bad guy, but if you had to put it in as simple of terms as that, he is. James is the cool guy, the guy who never has to work, even a little bit of a bully that the nerd, Mike, has to overcome and eventually work with to get back into the scare program. Both characters realize through the story that if they are going to make it through this, they are going to have to drop some of their expectations and learn to look at things differently.

Monsters University gives Pixar a chance to do what it does best, and that is tell a great story. In a summer when origin stories and reboots this story stands out. Not because it is not an “odd couple” origin story that we have come to know and love, but because it does it so well. Mike and James are just about as different as can be while working toward the same goal. They are forced together and eventually learn to understand each other and in the end become friends.

The Movie keeps the look and feel of the first one with some nice additions to keep it fresh. You will recognize a lot of the side characters from the first movie and some of the more prominent ones as well while learning a little more about how they got to be who they are.

One of the most incredible parts about either of the “Monsters” movies is that this is a story at its core about scaring little kids. Yet, even the youngest of my kids with me (6) was not scared of the movie. Mike and James does some things that really could be scary to kids, but Pixar takes those moments and kind of pokes fun at them, giving you something to laugh at instead of being scared of.

In closing, I will comment again on Pixar’s ability to tell a good story. They have always been able to do so. Their approach in making the characters, really almost all the characters, have depth and feeling is great. They do a great job with keeping the theme of, just because life is not going the way you expected does not mean that it is not going to work out. You can have a movie that is stunningly beautiful and still falls flat. You can have a movie that tells a good story with good characters that is uninteresting. You can have a kids movie that is utterly boring to parents, or that tells inappropriate jokes in an attempt to keep parents entertained while watching the movie with their kids. This movie does none these. One think I think that they have learned is that if you tell a good story with enough depth and emotion to it, it will work for a wide audience.

If you are looking for one movie to take your kids to this summer. This really is it.