The Spices of Life 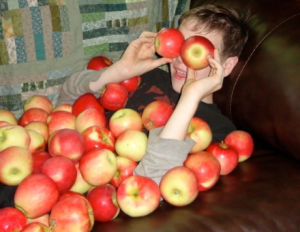 As many of you know, November kind of sucked for us as a family. But it was not all dark, there were some rather amusing tales that came out of it. For example, we learned that given the opportunity my children will eat like hobbits. But that is a story for another time.

When My wife and I were rushed off to the hospital, her in one ambulance and me in the other with the baby, we had to make some pretty rushed plans for emergency child care. We had plans in place but it did require us to make some rushed phone calls to friends, neighbors and parents, to arrange to take care of them over the next couple of days.

One of the things that I am really happy about when things like this come up, is that my kids really are not picky eaters. Sure, each of them have those things they don’t like, and they almost all groan if I make oatmeal more than one a week for breakfast, but for the most part, there is almost nothing they won’t eat.

For several of the kids this goes to extremes with spicy foods. Even the 2 year old, when she sees the jar of banana peppers come out, beg for one. A little side note here, I would never give them one of those super hot things that would actually burn them or anything like that, and even with the milder things I am careful. We do tend to be rather Americanized and stick mostly to the things that you can find on your standard grocery story shelf as far as spicy things, but occasionally we do branch out. So for the most part, thinks like Jalapenos and chipotle peppers are the hottest things they have tried.

Well several of the children were with a family who tend to cook with a few more of the Asian spices. While they were there, my oldest son and daughter we talking about how they can eat really spicy foods. This led to a discussion about how many jalapeno rings each of them had eaten. The mother of the house, knowing that she had some spicy stuff around could not let this stand. She reached for one of her spices and let them each try some.

Now to their credit they each tried some, but from what I understand there was a lot of milk drunk and no more discussion of how spicy the food they could eat was.

I personally found the whole thing rather funny. I love that they were willing to try something new, and that they both found a limit. I also have to say that I am glad we have such good friends that were willing to watch the kids and even share some of their spices with.

just an update. Apparently my oldest son has had ghost pepper sauce. He corrected me after reading this.