When I was a kid I wanted to do a lot of things, but chief among them was being an astronaut. My brother and I even build our own spaceship. We had big plans, we were going to Venus, we would plant trees and make it breathable in a few years. We at least knew enough that we needed something to convert the Carbon dioxide, but we were missing a few other facts, like a temperature of 460 C.

This first attempt obviously a bit amateurish, but give me a break we were only 8 and 6 at the time. By the way that is me in the front, he is in the “engineering spaces” in the back. You can just see him holding on to the brake. The ship was built from scrap parts that were laying around my the yard as my uncle build his house, where we spent a lot of weekends that summer. It was the early 80’s we had big imaginations. 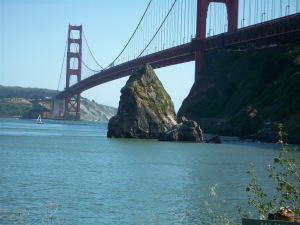 Skip ahead to the present. I still don’t see Star Fleet Headquarters on the shore here, but at least we have made some progress. Since then and now we have had a pretty successful shuttle program, that while it didn’t get us to any new planets or cool Venus down enough that my brother and I could plant those trees, it did teach us a lot about living and working in space. There were some bumps in the road, but as the Star Trek – Enterprise theme song so ably puts it, nothings going to hold me down. It says a lot of other things but that is the one I want to take away from this.
This past year we saw some incredible steps toward finally getting into space. The private companies, SpaceX and Virgin Galatic have made some impressive progress toward normal space travel, Notably with the dragon space craft docking with the international space station and the their new reusable rocket system. Again not traveling to other planet but a big step. This past year NASA also put on one of the greatest shows with their Curiosity rover, Landing on Mars.
It has been a great year for space travel. Here is looking forward to another very exciting year.