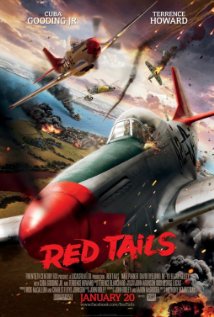 Last night was date night for my wife and I, and we watched Red Tails. We have had this movie sitting on our counter for a while now, so we decided that is was about time. To be honest with you I didn’t know if I was going to like to the movie. I have come to realize that movies and especially movie trailers are not marketed toward me any more. Not that I am sure that they ever were. I guess that makes me old and crabby or something. In the end it does make me rather hesitant to watch new movies, and really hesitant to pay to go see a movie.

As I was saying, I was not sure I was going to like the Movie. I like history, and I like Air Force / Army Air Corp history quiet a bit. I know the story of the Tuskegee Airmen, and I certainly find it interesting. So what was I afraid of? Well a few of things. First, that this would be a super politically correct movie. Second, that the sex and violence would be over done. Third, that it would be all about the flying and not about the other battles that these brave men fought.

The good news? For the most part I was pleasantly surprised by this movie.

A crew of African American pilots in the Tuskegee training program, having faced segregation while kept mostly on the ground during World War II, are called into duty under the guidance of Col. A.J. Bullard.

If you know nothing about the Tuskegee Airmen you can watch this movie and enjoy it. It does a good job of showing you a slice of life of what happened during the
last years of World War II within one unit of Tuskegee Airmen “Red Tails.” If you are watching the movie for the history, I would suggest that you need to use the movie (as with most movies) as part of a much larger study block. While the movie is mostly historically actuate it does little to tell the story behind the Tuskegee Airmen and what they endured to get to this point. Instead Red Tails focuses mostly on the flying battles they fought once they were finally given the chance.

Red Tails, Thankfully was not a super politically correct movie. The Pilots and Airmen of the Unit were not shown as shinning beacons of virtue hidden under a basket, instead the movie did a pretty good job of showing them as flawed individuals doing the best with what they were given.

I was also pleasantly surprised that the sex and violence was kept to a minimum. There is one scene were sex is hinted at, but never shown and everyone is pretty fully dressed. And while this is a movie about war, and there is blood and there are explosions and bullets, these scenes were not over done and not the focus of the movie.

In this third category, I would say, was probably my biggest disappointment of the movie. They flying scenes are spectacular. If you know anything about planes and how they fly and what it takes to keep them in the air, you will know they did a pretty good job with all of these things. I was impressed that they actually showed aircraft maintenance as more than a bullish roughneck with hands bigger than his brain, (see Pearl Harbor.) So in those two things I was pretty happy. I do understand that this is a movie and a fictional retelling of events so it pays to have as many exciting scenes as possible, and really the fights in the pentagon, while probably actuate, are not as exciting as planes tearing across the sky blowing stuff up. But I wish they had focused more on what happened outside of the cockpit, and gave a little more for the history. Although, the fact that the pilots are African American is talked about the struggles they fought just to get into the air in the first place was pretty well down played. Having said that, I would still give the movie a thumbs up.

This would be appropriated for upper middle school or high school kids to watch as it is not overly bloody or violent and not very racy at all. It could also a decent addition to a curriculum about the time period, as it appears to be mostly historically accurate.